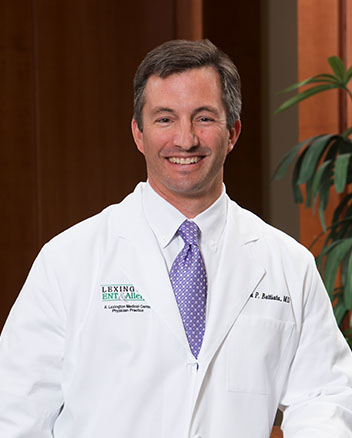 Dr. Battiata is originally from the Washington, DC Metro area where he attended St. John’s College High School in Washington, DC. He completed his undergraduate Pre-Med coursework at James Madison Univeristy in Virginia, where he met his wife, Laura. Dr. Battiata completed a research fellowship at the National Institutes of Health National Cancer Institute and completed his Medical Degree at Georgetown University School of Medicine in Washington, DC.
Dr. Battiata received his Commission at the US Army Medical Corp in 1997, and continued in the US Army Medical Corp to complete his surgical training in General Surgery and Otolaryngology Head and Neck Surgery at Walter Reed Army Medical Center in Washington, DC, and the Bethesda Naval Hospital in Bethesda, MD.
His training included extensive rotations at the National Children’s Hospital in Washington, DC, and the University of Maryland Shock Trauma Unit in Baltimore, MD. Upon completion of his Otolaryngology Residency, Dr. Battiata was selected for a position as an Attending Surgeon at Walter Reed Army Medical Center’s Otolaryngology Service. During this time, he served as the Assistant Chief of the Otolaryngology Service, and was intimately involved with the Microvascular Head and Neck Reconstruction and Surgical Oncology Teams. Dr. Battiata was later appointed to the position of Chief of Otolaryngology at the United States Military Academy at West Point in West Point, NY.
Dr. Battiata now resides in the Midlands of SC, and provides comprehensive surgical and non-surgical ENT care to patients of all ages. He and his wife, Laura, have three wonderful children. When not at work, Dr. Battiata enjoys spending time with family, their two dogs, and many of the local attractions of the Columbia area and SC beaches.
Dr. Battiata is a Basic Life Support Diplomate, and a member of the American Academy of Facial Plastic and Reconstructive Surgery, the American Academy of Otolaryngic Allergy and the American Academy of Otolaryngology, Head and Neck Surgery.